The History and Development of IATUL 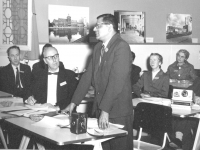 IATUL was founded in Düsseldorf, Germany, as the International Association of Technological University Libraries in May 1955, as an international forum for the exchange of ideas relevant to librarianship in technological universities throughout the world. IATUL is a voluntary international non-governmental organisation of a group of libraries, represented by their library directors or senior managers, who have responsibility for information services and resources management. The expanded name of IATUL was changed to the International Association of Scientific and Technological University Libraries at the 2009 General Assembly to reflect the broader range of institutions, which now make up the membership of the association. At the 2014 Annual Conference in Helsinki, the General Assembly of IATUL decided to extend its mandate to include all university libraries internationally, irrespective of their academic specialisation. This change reflects the membership profile of IATUL where the vast majority of institutions now belong to comprehensive universities. Therefore, its name was changed to be the International Association of University Libraries.